It was a long day at work today.  Long and busy.  May and June are the busiest months of the year for me.  A combination of getting everything (campgrounds, trails, waterlines, etc.) running in a short amount of time, plus hiring and training new and returning staff, plus monitoring budgets before the end of the fiscal year (June 30) spending as much as we have but not too much.  Throw in a couple of prescribed burns, acres and acres of invasive species control, a dozen project proposals and a potential boundary expansion and I've got a full plate.

Anyway, after work Hubby, G, B and I drove to Mankato and met O and E for supper.  After supper we took a quick trip to Fleet Farm looking for a flannel shirt and light jacket with zipper pockets for B.  After striking out at Fleet Farm for both items (seriously, no flannel shirts at Fleet Farm?) we headed back home, turning into the driveway just as the sun was setting.

My comfortable cozy bed is calling to me, but I wanted to put together a quick post before changing into pajamas and settling down with my IPad to watch an episode of Russian Doll on Netflix.  I've got a few things to catch up on.

There was a long break in my blogging from last summer to this spring.  Like I've said before, sometimes I lose motivation to put words to screen, time goes by quickly and soon months have passed.  Truth be told nothing really remarkable happened over those months.  Perhaps the only major thing that happened was COVID hitting our household last fall.

We think G brought it home from school (thanks NU High School for your lack of masks!) in mid-October.  He was sick for a day and a half, with the main symptoms of a headache and very dry mouth.  We didn't realize it was COVID until Hubby got sick a few days later and decided to test himself.  Hubby had only mild symptoms, as did B when he got it and I soon thereafter.  We all thought we had dodged a bullet.

However, about four weeks after that I fell ill again.  What I thought was just a cold turned into something much worse.  High fever, swollen throat, wheezing and rales, horrible sinus pressure.  I lost my voice and popped an eardrum.  My blood oxygen levels dropped and my digestive system took a holiday.  Doctors put me on albuterol nebulizers and oral prednisone.  I was bed- and couch-bound for several weeks, concentrating mainly on taking one breath after another.  It was terrible, the sickest I've ever been.  As an added bonus my blood sugar levels shot through the roof, putting me squarely in Diabetes territory where I hadn't been before.

The docs never tested me for COVID with the second sickness, so it's possible I became reinfected with the new Omicron variant in December.  It's more likely, however, that I was/am one of the many many people dealing with post-COVID complications.  I've just read that 75% of people dealing with post-COVID crap had very mild illnesses to begin with.

Fast forward four months and I'm mostly better now, but I find myself a little slower on the uptake than before.  Making more stupid mistakes in my paperwork, taking longer to think of the right word when talking, losing track of what I'm doing in the middle of doing it.  It could just be old age, early Alzheimers, or general ineptitude, or it could be the covids.  Hard to say.

My blood sugar levels have retreated, but I'm still in the pre-Diabetes range, so the docs want me on metformin for a few more months.  I'm doing better with my diet, but comfort food is just so, well, comforting.  And I do really like the comforts, both with food and with my comfortable cozy bed, to which I'm heading shortly.  Gotta get the sleep for another long, busy day of work tomorrow.

I went to a quilt show last month, held by a local quilt guild.  I love quilts.  Especially the old fashioned patchwork quilts made with flour sack patterns.  If I had oodles of time (and significantly more skill) I'd spend a chunk of it quilting.  I've got quilts from my great-grandmother and my mother, and I treasure them highly.  I'd like to think of my kids and grandkids treasuring something that I'd made.

Here's a few of my faves from the show: 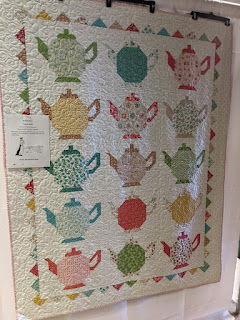 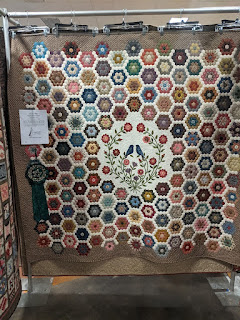 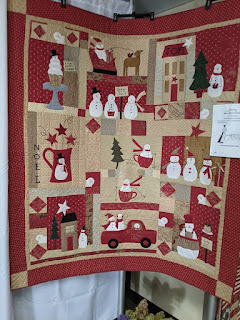 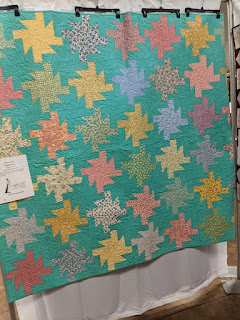 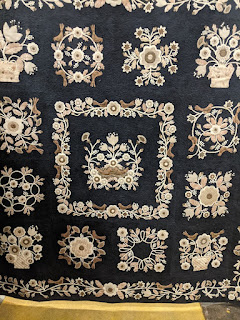 Now I just need to get oodles of time to do all the things I want to do.

Because I just wasn't busy/crazy enough, I decided that I needed more raised beds.  It was easy for me to make this decision, because: a) you can never have enough garden space; b) even if you have too much garden space it isn't enough; and c) I'm not the one actually building the new beds.

So my husband, ever gracious, is building me six more raised beds.  Which will bring our total to 18.  I think maybe, just maybe, that may be enough.  Besides, four of our old beds are starting to fall apart, so we'll need to spend time & money (holy cow lumber is expensive!) fixing those next spring. 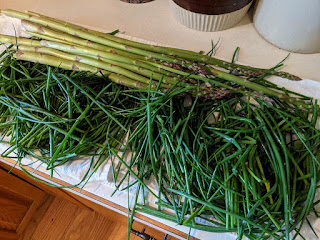 Today I made the first harvest of the year - chives and asparagus.  Most of the chives will be chopped and frozen.  The asparagus will be grilled and eaten with supper tonight along with pork chops and rice, one of my mother's favorite recipes. 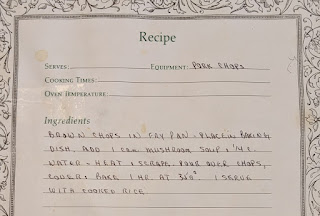 Yesterday while at the park I walked out to the old irrigation pond.  This pond was created back in 2007 when the golf course was redesigned.  They dug a 15' hole in the ground, lined it with clay, and filled it with river water.  A wet well with a couple of large pumps was attached at one end for supplying water for the irrigation lines.  A pump down by the river pushed water up the hill to fill the pond when it got low.

When the course closed in 2017, all the pumps were shut off.  We all wondered if the pond would hold water on its own, and if/how the pond would change now that water wasn't constantly cycling in and out of it on a daily basis.

I'm no expert, but in my mind the pond has done very well.  Cattails and willows along the edge, insects buzzing around, blackbirds and kingfishers and ducks in and over the water.  The loud hum of frogs singing in the shallows. 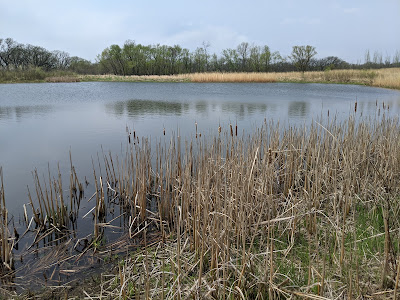 I could have looked and listened all day.

If I had millions and millions of dollars I'd buy thousands of acres of cropland.  Then I'd dig hundreds of holes and make a hundred ponds just like this one.  Ponds to hold the rainwater on the ground, instead of being flushed into the nearest river by the ever-increasing lattice-work of agricultural drain tile and drainage ditches.

Farmers like to say they're the stewards of the land, but most of the time that's a bunch of crap.

Doesn't look good for the citron. 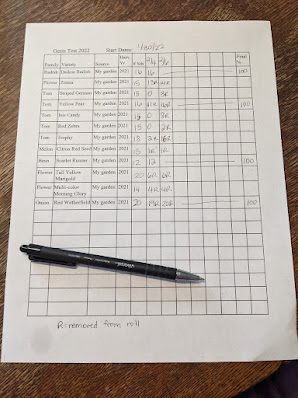 We've got house guests for the next two days.  Hubby's mom and aunt are visiting from Florida.  They came up north to attend a family reunion on Saturday and are making the relative rounds until they head back Thursday.  I enjoy talking with them about their family history.

Hubby's grandparents raised seven kids on a farmstead in Zumbrota MN.  Oscar Nelson worked at the local creamery, winning awards for his butter making.  Alice MacIntyre Nelson was a homemaker, breadmaker, jam-maker, etc.  Hubby has fond memories of spending summers at their house, playing with a horde of cousins and wandering wild around the countryside.  At night his grandma would tuck the horde into bed reading bible stories.  Three to eight young boys, depending on who was staying, sharing two double beds.  They'd run up the stairs to the tune of 'Shadrach, Meshack, and into bed you go!'

My grandparents lived in a large house on Lake Harriet.  Despite living just 45 minutes away, we only visited them a few times a year.  Everything in their home was elegant and formal and tidy. We rarely spent the night, but when we did I slept alone in a small room.  I don't remember my grandparents ever tucking me in, let alone reading me stories.  My father was an only child, so there were no cousins to play with.  I do remember playing cards with my grandmother on the living room coffee table, but most of the time I just played by myself with a few of my father's old toys in the sun room.

I'm sure my grandparents loved me just as much as Hubby's loved him.  Different families, different lives.