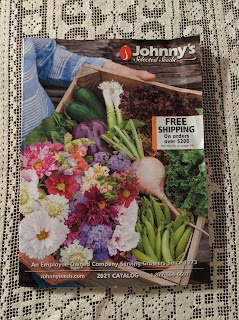 The first seed catalog has arrived! Cry 'Havoc!', and let slip the dogs of garden planning!

Last winter I started my journey to becoming a University of Minnesota Master Gardener.  It sounds more grandiose than it actually is.  Basically, Master Gardeners have to go through a series of training courses, serve volunteer time and pay a fee (of course) and then are 'certified' by the U of MN.  To earn the certification, I have to contribute 50 hours of volunteer time this year.  It's been a bit of a challenge to earn those hours in 2020, but through social media, zoom, and online opportunities I've come quite far.

Indeed, far enough to be just one hour shy of my 50 hours!  So, I'm using this post to reach my goal.  I thought I'd come up with a list of things that I know now about gardening, things I wish I had known when I started.  Tips and tricks for the novice-yet-enthusiastic gardener.  Lessons learned over the past 20+ years of digging in the dirt, mainly focused on vegetables.  Keep in mind these are MY lessons and they may not be true for everyone.  So, here goes.

Final thought - don't forget farmers' markets.  For those hard-to-grow, space-sucking plants like melons, sweet corn and winter squash, plan to pick those up at the farmers market throughout the summer.  We need to keep our local farmers in business too!

Back in 2000 Hubby purchased a copy of the Iron Dragon computer game released by Eden Studios.  We enjoyed playing the board game, so he thought we would like the computer game.  And we do!  It's a great little game, one that I still play today.

The size of the game is only 14 MB - small enough to be burned onto a CD back before thumb drives were a thing. The game has run on every version of Windows that we've owned since then. which is something most old games don't do.

Unfortunately Eden Studios no longer exists, and I don't think you can get a copy of Iron Dragon anymore.  Which makes me extra glad I still have mine.  So if you're looking for your own copy, you may be out of luck.  However, like I said it's a small game and easy to copy ...

We're a game-playing family.  Always have been. Board games, card games, video games, role playing games, dice games, we love them all.  And play them all, even (especially) during the pandemic.  Once a week we play Terraria online with O in Mankato and my nephew J.  On weekends we play Civilization online with Hubby's brother and father.  Hubby and the boys even play the 'I've lost the game' game (google it if you're confused), which I refuse to do.  To quote War Games, the only winning move is not to play.  Spoiler alert!

For the last umpteen years our family has spent the day after Thanksgiving with Hubby's family, snacking on bacon-wrapped everything and playing board games.  Our favorites include Settlers of Catan, Risk, Empire Builder, Ticket to Ride, Sequence, and many others.

This year we will continue this tradition at home, using our vast collection of board games we've collected over the years.  We probably have over a hundred of them, from the 1950s Diplomacy to modern Apples to Apples.  And we have multiple decks of playing cards for our rambunctious games of multiple solitaire.  Multiple solitaire has been a staple in my family for decades.

When my parents were still alive, and I was still living near St. Paul, my younger sister and I would spend several evenings a week playing cards with Mom and Dad.  We'd play three different games -- 500, Hearts, and Liverpool.  Those were lovely times.  We'd play at the large oak table in their kitchen, laughing and teasing and guilting Dad into making us milkshakes.

And this Thanksgiving my family will sit around that same oak table in my kitchen, laughing and teasing and playing games with each other.

My hens can lay a rainbow.  Anyone remember that song?  Well, not the chicken version, but the original - 'Sing a Rainbow.'  It's a song for kids -- a fine song, but nothing special.  However, it is a massive ear worm.  Get it stuck in your head and it'll be there for hours.  You're welcome.

That song was on a record called 'Junior Hits' that my family had.  This was in the 1970's, before audio tapes and CDs came onto the scene.  It was a fantastic record, well-loved by my older siblings and I.  It featured a variety of fun kid songs, including 'Jake the Peg,' 'The Court of King Caractacus,' and 'Tie Me Kangaroo Down' by Rolf Harris.  It also had a song my mom loved called 'Two Little Boys.'  It made her cry every time she heard it.

Anyway, my hens can indeed lay a rainbow.  Different breeds of hens will lay different colored eggs.  The green egg on the far left is laid by my Ameracauna hens.  The white by my California whites, the middle browns by any number of hens (I can't tell what breeds exactly), and the dark brown by my welsummers.

My new hens, the ones I bought as day-old chicks this spring, have started laying (finally).  They lay smaller eggs, called pullet eggs, for the first few months.  Sometimes there will be color splotches (see egg #5 above) on the shells too.  That's totally normal.  I just love the variety, the rainbow of colors.

Argh.  The worm has indeed burrowed into my brain.  They say the best way to get a song unstuck is to listen to it through to its end.  We'll see if it works.

Cleaning zinnia seed is a messy business.  But it's a labor of love, knowing that these seeds will bring lovely flowers next year.  I've got a box full of dried flower heads, and whenever I have a few minutes between kitchen tasks, I sit down and winnow.  If anyone wants some zinnia seed, let me know!